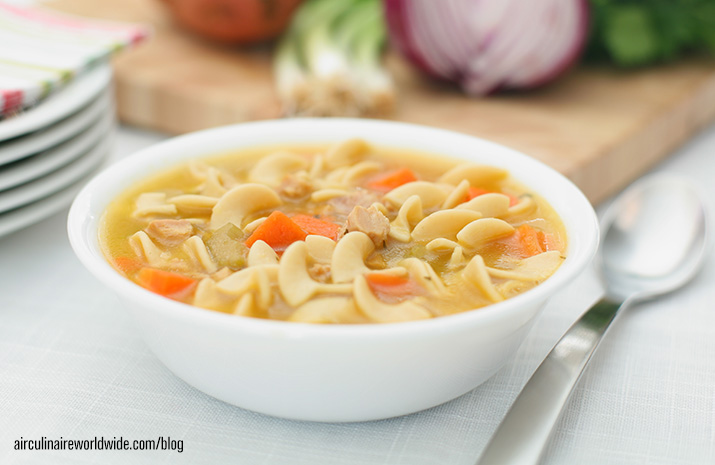 We all grew up having a nice bowl of chicken noodle soup, and many believe that the soup is the cure for the common cold. Campbell’s first introduced noodle soup with chicken in 1934. During a radio show of “Amos n’ Andy,” Amos misread his script and said “Chicken Noodle Soup.” Within a few weeks, Campbell’s changed the name. Research has shown that each can of soup contains 216 noodles measuring 32-34 feet of noodles.

Soup can be dated back to about 6000 B.C., and was first made of hippopotamus; I hope they had a big pot! To make a good chicken soup, it all starts with the base, and several terms are sometimes associated with the base liquid of the soup. So, here is a rundown:

Chicken broth is the liquid part of the chicken soup. Broth can be served as is, or used as stock, or served as a soup with noodles. Broth can be milder than a chicken stock, does not need to be boiled as long, and can be made with meatier chicken parts.

Chicken bouillon or bouillon de poulet is the French term for chicken broth.

Chicken consommé is a refined chicken broth. It is usually strained to perfect clarity, and reduced to concentrate the flavors.

Chicken stew is a more substantial dish with a higher ratio of ingredients to broth. The broth may also be thickened toward a gravy-like consistency with a roux or by adding flour-based dumplings (matzah balls do not have the same thickening effect).

Chicken stock is a liquid in which chicken bones and vegetables have been simmered for the purpose of serving as an ingredient in more complex culinary dishes. Chicken stock is not usually served as is. Stock can be made with less palatable parts of the chicken, such as feet, necks or bones: the higher bone content in these parts contributes more gelatin to the liquid, making it a better base for sauces. Bouillon cubes or soup base are often used instead of chicken stock prepared from scratch.