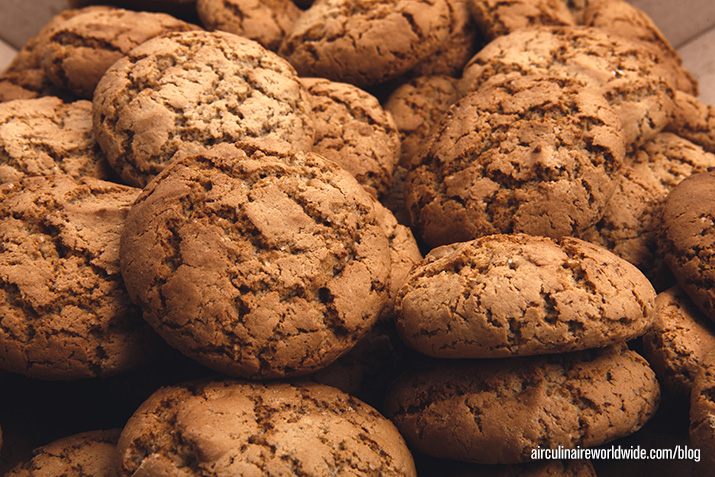 The first recipe written for an oatmeal cookie was in 1896 by Fannie Merritt Farmer. However, oats have been documented all the way back to 7000 BC. It is even said that when the Romans tried to conquer England and Scotland, the Scots and English carried oat cookies to keep their energy up.
Today, over seventy-five percent of households in the United States have oatmeal in their cabinets. There are a variety of oats that can be used to make oatmeal cookies, so let’s go over them.

These oats are unflattening kernels that are excellent for use as a breakfast cereal or for stuffing.

These oats feature a dense and chewy texture; they are produced by running the oat through steel blades that thinly slices them. They are also called Irish Oats or Scottish Oats.

These oats have a flatter shape that is the result of the oat being steamed and then rolled.

These oats are processed like old-fashioned oats, but they are finely cut before rolling.

These oats are produced by partially cooking the oat and then rolling thin. Usually, the oat is added with, sugar, salt and other items to make the finished product.

This oat is the outer layer of the grain that is under the hull. While oat bran is also found in rolled oats and steel-cut oats, but it can also be purchased as a separate product.

This oat is used for baking, it is usually combined with wheat, or other gluten-containing flours, when making leavened bread.