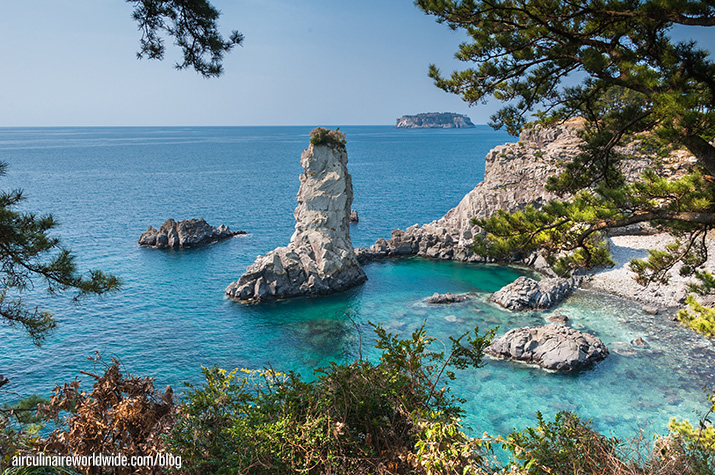 If the first thing you think about when you hear “South Korea” is crystal-clear water, volcanic formations and stunning landscapes, perhaps you have been to Jeju Island before. This island, previously named “Cheju-do,” has been an increasingly popular exotic destination for private jet passengers looking for a relaxing getaway. Here, adventurous travelers are greeted by a unique culture and cuisine, incredible vistas and five-star luxury.

During trip planning, you will notice that the climate in Jeju (which means “province across the sea,” referring to the Sea of Japan) Island is mild and pleasant nearly year-round, with summertime average temperatures reaching right around 80 F (27 C). Jeju International Airport (CJU / RKPC) is the main airport for the island, and also is the second largest airport in South Korea. Inflight catering is available through the Air Culinaire Worldwide Network, with a local catering partner serving Jeju International Airport’s departing private flights. Peak inflight catering season in Jeju Island starts in May and lasts through September.

Naturalists will love the variety of spots to hike and explore while on Jeju Island. Hallasan National Park, a UNESCO World Heritage Site, is home to Hallasan, the highest mountain in South Korea, which is a spiritual destination for locals. In reality, the whole volcanic island is part of Hallasan. A volcanic crater tops Hallasan, and is an amazing sight as you come in for a landing. Equally as majestic are Baengnokdam (“White Deer Lake”), a crater lake, on Hallasan which is accessible via hiking trails, and Jusangjeollidae, a series of volcanic cliffs. There are also waterfalls, like Cheonjiyeon and Jeongbang, to enjoy and pristine beaches, like Hamdeok Beach, to spend a day relaxing on. After experiencing all of this for yourself, it is obvious to see how the island is now considered one of the new seven wonders of the natural world.

Being that you are in an island setting when visiting Jeju, it is no surprise that most of the local cuisine features fish and seafood as the main ingredients. In addition, you will find pork dishes and pheasant, which is abundant on the island. Heuk Dwaeji (“Black Pork”) is at the top of the list of iconic Jeju cuisine; this type of pork is distinct to the island. This dish is so synonymous with Jeju Island, that you will find your fill of restaurants serving this barbecued feast on “Black Pork Street.” If you are looking to splurge on the island’s most expensive delicacy, order some Jeju abalone, found served in a variety of preparations, including grilled, sashimi-style, with rice or as porridge.

The culture of the Jeju Island people is unique to the island but has been influenced by Japanese, Chinese, Mongolian and, most heavily, Korean cultures over time. One part of this unique culture is the Jeju haenyeo (female divers), who are fiercely independent and work in extreme physical conditions, with no breathing equipment, to harvest fresh abalone, oysters and other forms of sustenance from the sea. So, when enjoying the local cuisine, you can think about the local traditions and the shift to a more matriarchal society your meal has had on the local citizens.

If you have any questions about this article or inflight catering in South Korea, contact weborders@airculinaire.com.