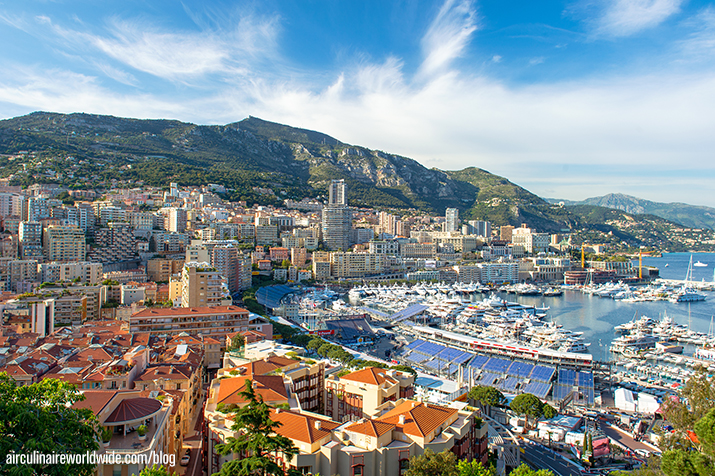 With Monaco’s peak season upon us, it is the perfect time to get to know more about this top spot for the world’s elite, nestled in the French Riviera. While France borders Monaco on three sides and the official language is French, it is a separate country with a constitutional monarchy. From June through August, if you are traveling to Monaco on a business aviation trip, you will witness Monaco at its height of tourist activity. During those months, all lodging and dining reservations are typically made several months in advance due to the crowds.

When flying to Monaco, you will operate to Nice Côte d’Azur Airport (LFMN) which is the closest airport but is in neighboring Nice. From there you will finish your journey by car or helicopter flight to the Monaco Heliport. Monaco is also reachable through the train system, and trains to other popular locations run daily. When your visit to Monaco is coming to an end, inflight catering is available out of the Nice Côte d’Azur Airport through the Air Culinaire Worldwide Network if inflight catering partners. Inflight catering reaches its peak demand also during the summer months and during large events that Monaco is known for around the globe, such as the Monaco Yacht Show, Monte Carlo Rolex Masters and the Formula One French Grand Prix.

For a country as small as Monaco, it has plenty of green spaces to enjoy, including the Exotic Gardens with an Observation Cave, Japanese Gardens, Zoological Gardens and Princess Antoinette Park. If you prefer a day relaxing in the sun or filled with water activities, then head over to Larvotto Beach.

While Monaco’s coastline is picturesque on its own, you will see gorgeous architecture and a marina full of amazing yachts. Add to that a rich culture, and this is one location that is sure to leave an impression for a lifetime. A few such places to visit for a look at local history and culture are the Monte-Carlo Casino and Opera House, Fort Antoine and the Prince’s Palace. In the opera house, but only can you catch a performance but you will also take in the architecture of Charles Garnier, featuring marble and onyx. Fort Antoine is a place to go for entertainment through live performances with an outdoor setting of an 18th-century fortress. The Prince’s Palace is available for tours from April through the end of October, including the throne room, 17th-century chapel and St. Mary’s Tower. At precisely 11:55 am daily, the changing of the guard occurs, so time your visit wisely.

For experiencing the unique cuisine Monaco has to offer, you will find a handful of interesting dishes to try depending on your level of adventure-seeking through food. Barbagiuan, a deep-fried pastry appetizer which comes filled with Swiss chard, spinach ricotta, Parmigiano-Reggiano onions and leeks, is reminiscent of empanadas. Pan Bagnat is a well-known sandwich from this region which is simply described as a Niçoise Salad in crusty French bread. If you are looking for gluten-free options, or just want to try something new, socca is a flatbread made only with chickpea flour, water and olive oil. When the mood strikes for fish, order stocafi, a fish stew typically made of cod, red wine, tomato sauce, onions and garlic.

If you have any questions about this article or inflight catering in Monaco, contact weborders@airculinaire.com.