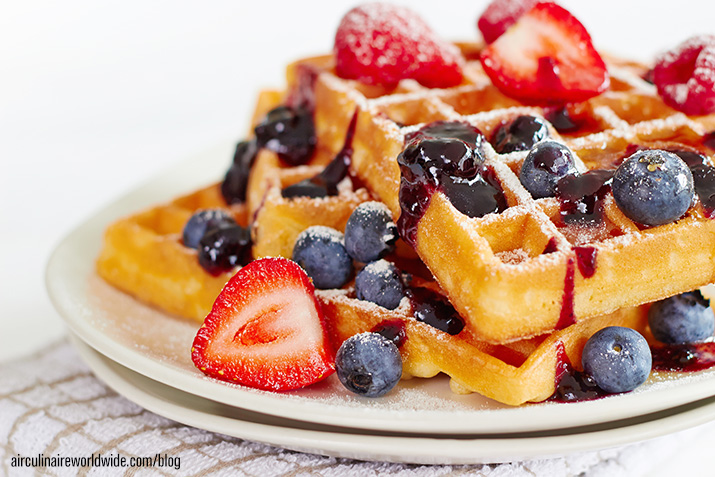 A waffle isn’t just a waffle, depending on where you are from. As a chef, I love waffles and can make almost anything into a waffle; like waffle cheese sandwiches, crab cakes and desserts. I love the waffle iron, but there is nothing better than a true waffle. What is the true waffle that you like? Below you will find a variety of waffles from around the world.

Brussels waffles are made with an egg-white-leavened or yeast-leavened batter, or both. They are lighter and crispier than most waffles. The waffles have larger pockets compared to other European waffles, and are noticeably different from Liège Waffles by their rectangular sides. You can find these waffles throughout the streets of Belgium, and they are usually served warm with a slight dust of confectionery sugar. In the tourist areas, you can find them with whipped cream, chocolate and soft fruit if you dare to indulge. These popular waffles can be dated back to the mid-1800s and are a staple to Belgium.

Galettes campinoises is another type of waffle popular in Belgium. They are hard and crunchy, but are buttery and smooth in the mouth.

The Liège waffle is a much richer, denser and sweeter waffle. Originated in the Wallonia region of Eastern Belgium, and is known as “gaufres de chasse,” that is translated to “hunting waffles.” The Liege waffle is a twist on brioche bread dough that features chunks of pearl sugar. The sugar caramelizes when the waffle is baked. This is the most common waffle available in Belgium, and it usually comes in plain, vanilla and cinnamon varieties.

Flemish waffles are known in the northern region of France and parts of western Belgium. The original recipe can be dated back to 1740, by Louis-Auguste de Bourbon in Le Cuisinier Gascon. Similar to the Brussels waffle, but smaller and has a different shape without a defined outside line.

American waffles vary significantly and are generally denser and thinner than the Belgian waffle. These waffles are usually served like pancakes for breakfast with syrup, but today chefs are making waffles in the United States with everything from chicken and waffles, to steak and waffles. There is actually a chain of restaurants with over 2,100 locations, named the Waffle House.

Hong Kong-style waffle or “grid cake” or “grid biscuits,” is a waffle sold by street vendors. These waffles are usually much larger and sweeter. The waffle comes usually with peanut butter, butter and sugar spread on one side and then folded. Another style of the Hong Kong waffle is the eggette, which has a ball-shaped pattern.

Pandan waffles from Vietnam are flavored with coconut milk and pandan (a tropical plant used in Asian cooking). These waffles are green, from the pandan, and are usually eaten plain.

Scandinavian-style waffles from the Nordic countries are thin heart-shaped waffles. These waffles are usually topped with whipped or sour cream, and topped with jam.

In Norway, brunost (Brown cheese) is a popular topping.

In Iceland, the traditional topping is either rhubarb or blueberry jam.

The Swedish tradition dates at least to the 15th century, and there is even a particular day for the purpose, “Våffeldagen” (waffle day). They are usually topped with strawberry jam, bilberry jam, hjortron jam, raspberry jam, bilberry and raspberry jam, sugar and butter, vanilla ice cream and whipped cream. Other toppings include salmon roe, cold-smoked salmon and creme fraiche.

Gofri are waffles in Italy and can be found in the Piedmontese (Northern Italy) cuisine: they are light and crispy in texture, they contain egg or milk and come both in sweet and savory varieties. Central Italian also features waffle-like cookies, which are locally known as pizzelle.

Stroopwafels are thin waffles with a syrup filling. Medium balls of the batter are put on a waffle iron and baked. When they are done the cut them in half and fill the waffle with a warm filling that glues the two pieces together.

Potato waffles are usually found in the United Kingdom and Ireland, they are made from potato formed into a waffle iron shape.

Hot dog waffles are long waffles with a hot dog cooked inside them, similar to a corn dog. The hot dog waffle started in Thailand and served with ketchup, mayonnaise or both. The waffle is similar in texture to the American waffle, but uses margarine instead of butter.