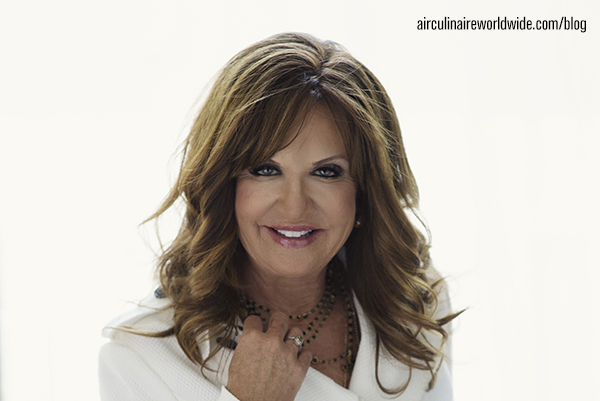 Today we have the distinct honor to bring you a one-on-one interview with corporate flight attendant and author, Ann Menke. Read on for an in-depth interview about Ann, her inspiration to venture out into the private aviation industry, her experiences and information on her favorite destination – Mauritius!

Which aircraft have you flown on during your career?

Where did you receive flight attendant training?

Long, long time ago, I got on with a company called Horizon Air. My initial training was with them, then I did another initial with Alaska Airlines, but before really starting to fly, I switched over to corporate aviation. I went through initial training with Aircare FACTS back in the day when Bo was in charge and Doug and Blain were instructors. Oh, wait, Blain is still instructing! I have also gone multiple times to FlightSafety, along with Combat Training and MedAire. This is another long list!

When was your last recurrent?

What are your base locations?

I started off being based in HIO (Hillsboro, Oregon), then BFI (Boeing Field, Seattle) and then finished in LMT (Klamath Falls, Oregon)/PDX (Portland).

How long have you been a flight attendant?

Impressive! How long as a commercial flight attendant?

About a total of 2 years, but in those days you could drop trips easily.

How long as a corporate flight attendant?

Have you received any awards / industry scholarships? Career highlights?

I have not received rewards in the industry except from my passengers; I was focused on leading a flight department and training flight attendants. I love to mentor.

Do you have a military background?

My father was in the Air Force for 28 years. Does that count?

Aside from your corporate flight attendant training, what other education do you have?

I started at Oregon State University in Clothing and Textiles (Home Ec) and changed my major to Business Management, where I transferred to George Fox College with a full ride.

Which languages are you fluent in?

English, and I married a man who is half French. We actually have a family home in Normandy. I would like to say that I understand French, not totally fluent, but can get by. Also, when I lived in Panama growing up I was in a Spanish immersion class. Then I married a half-French man and my Spanish has never been the same!

Which business aviation conventions and trade shows do you attend?

I have been to the NBAA. Generally, every time I was signed up to go to anything, I would get called out on a trip. I try to stay connected with others in corporate aviation.

What has been your most memorable flight?

I know this sounds too easy, but I have had quite a few that go down into the memory books. I guess if I needed to pick one, I would pick a two-week trip to Mauritius. It was incredible.

What types of cuisine do you prefer?

I am a ‘foodie’. Come on, I live in Portland, Oregon – the land of food cuisine! I love South American influenced foods, French, Asian, Italian…please don’t make me pick a favorite!

What are your favorite destinations, and why?

I have quite a few favorite destinations, but I still always go back to my all-time favorite: Mauritius!

What are your favorite restaurants in Curepipe, Mauritius?

There are quite a few new restaurants in Curepipe, pronounced, “Curer sa Pipe,” which literally means, “cleaning the pipes.” Two of my favorites are both in Curepipe, Plaines Wilhems District – La Potiniere, with Franco-Mauritian cuisine, and Le Clef des Champs on Queen Mary Avenue in Floreal, where the chef, Jacqueline Dalais, serves the most amazing French cuisine. I have eaten at both restaurants and used them for catering, as well. Anything with prawns at Le Clef des Champs is to die for.

What are some things to do that you would suggest for a corporate flight attendant visiting Curepipe, Mauritius for the first time?

Curepipe is the highest located city in Mauritius. That being said, have an umbrella on hand. The temperatures are a bit cooler there and it can rain. The town itself means La Ville-Luminere, “City of Light.” Curepipe is in the Plaine Wilhems District, and is referred to as the Central Plateau. It is also a historic center with the town hall, central market and the church, St. Theres (beautiful windows) situated around each other.

The Town Hall Gardens can be seen from the central market. The town hall was built in 1902 and was moved stone by stone from another location. The Carnegie Library is close to the town hall with a statue of Sir Gaetan Duval, a famous Mauritian in front.

The Curimjee Arcades on the corner of Winston Churchill Street and Royal Road are filled with little local shops that have everything in them from clothing, furnishings and on the 2nd floor a nice café. On the ground floor, Elysee is a factory outlet. Remember that duty-free shops, textile factories, diamond processing and beautiful jewelry is everywhere. Pushkaar and Arcade Salaffa are great arcades. Also, Salaffa, Cosmos, Garden Village Complex and Sunsheen Center have restaurants, Indian clothing and souvenirs throughout. I have stopped a couple times at the Private Collection and Volcano Club for higher-end items on the way to the dormant volcano, Trou Aux Cerfs. Also, Quatre Bornes market in the center of Quatre Bornes is worth a trip. The biggest shopping mall in Mauritius is the Bagatelle. It is gigantic and not my favorite, but many people love going there.

Curepipe was bigger than I expected with over 86,000 people living there. A lot of the locals live in this area, too. The language spoken is a Mauritian Creole that literally sings when spoken. Any cultural tips for a corporate flight attendant visiting Curepipe, Mauritius for the first time? (Think about nuances in food, language, culture, transportation, currency, etiquette that would help your friends not make a blunder.) The culture in Mauritius is influenced heavily by the French, even though at one time is was a British Colony. The Mauritians drive on the left hand side of the road. Road-workers will often turn signs instead of having stoplights.

The people are easy and friendly to get to know. I once stopped to ask for directions and the man hooped into his car in front of us and drove us to the place we were trying to find. Something new in Curepipe is having to purchase a parking ticket to park your car. I think only a few places in Mauritius have you pay to park. The currency in Mauritius is the Rupee. Local food is varied, but the seafood is amazing. I always see Massala Chicken on the menus, along with grilled fresh fish. Rasgoola, laddo and gulab jumoun are common. The beer is incredible and the local Rhum from Rhumerie Des Mascareignes is a must visit. In my book, there is a chapter all about being on Mauritius. My favorite thing to do in Mauritius is being out on the ocean.

What are some in-flight catering challenges you have experienced?
How did you overcome them?

I always pack my own containers for both hot and cold food, and bring them with me to the hotels. I have used restaurants, but we have always stayed at Le Touessrok Resort and Spa when in Mauritius. They have done my catering many times as well as the restaurants in Curepipe that I mentioned.

One time, I was staying at Le Touessrok and we had another week left in our stay. I got a last-minute call from my main passengers letting me know we needed to leave ASAP! I called the executive chef at the resort, and within one hour he had my catering ready, along with fresh flowers to take us all the way to Paris. It was a relief, not only having my containers, but to know that they just got it and had wonderful food ready for me. We actually left the island two and a half hours later, and to this day, I still don’t know how we did it, but we did!

What made you decide to become a corporate flight attendant?

What do you feel are essential skills for a successful corporate flight attendant?

Flexibility! You need to know that the passenger is never late and you are there to take care of them. Safety first, of course, but then, your passengers. Many times I have wondered how I could do something on board, feeling a bit overwhelmed and somehow, someway, it all comes together. Smoke and mirrors! I feel being fast on your feet, organized, caring, flexible and creative are essential.

What advice would you give someone looking to become a corporate flight attendant?

What email address should be used to contact you?

This article is part of a series of interviews we are conducting with corporate cabin crew members; individuals who are not employed by Air Culinaire Worldwide. If you would like to be considered for an interview, which is posted on our blog and all of our social media accounts, please contact socialmedia@airculinaire.com.