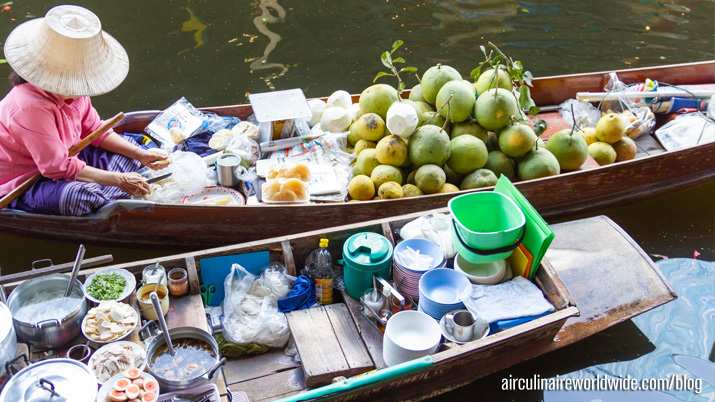 Bangkok, the capital of Thailand and its largest city, is situated right along the Chao Phraya River. Bangkok is a popular destination year round, however the most popular times are beginning in November and ending in March. With the warmest times of year being March through May, Bangkok is known for its historical and cultural landmarks as well as its street-life. One of its most visited tourist attractions is the Grand Palace as well as the Buddhist temples.

When working on a private aviation trip to Bangkok, you will land at either Don Mueang International Airport (VTBD) or Suvarnabhumi Airport (VTBS), which are located north of the city and east of the city. For inflight dining options on your departure from Bangkok, your needs can be fulfilled through the Air Culinaire Worldwide® Network. As always, it is best to plan your inflight catering needs at least 48 hours ahead for the details of your next leg, especially during peak season. The easiest way to plan and order your in-flight catering is via the ACW Menu app, available for Apple and Android mobile devices.

Although it is considered not peak travel season now, there is never a shortage of things to do and see while visiting Bangkok. An absolute must see is the Grand Palace and Wat Prakeaw. This was built in 1782 and was home to the Thai Kings along with the royal court. Another necessity is a visit to the floating market. The floating market is exactly how it sounds, wooden boats filled with fruit, vegetables and flowers, along with many other items for vendors to sell. Some will even put together a bowl of ‘boat noodle’ if you ask! Many of the common attractions surround the river that the city was built around. One of those is the Chao Phraya River and waterway water taxis. If you feel like regular taxis or buses were too mainstream, hop on one of these!

During some of the hottest months many head inside to the Terminal 21 shopping mall. Styled like an airport terminal, the shopping center hosts almost 600 stores, a supermarket and a food court. But, is a mall complete without a hotel? Apparently not! Stop in and see the Grande Center Point Terminal 21 which has tennis, karaoke, a putting green and even a pool. If you are looking to slow down a little, head to one of the many museums and art galleries in the area.

While many enjoy the history and the activities, there is nothing like the gourmet food. Bangkok is home to the classic Thai food as well as many other delicious cuisines. The most popular style is street food. One of the street-style restaurants even won a Michelin star, the Charoen Saeng Silom. Street food is local, economical and quick. Rich with culture and moving at a fast pace, the street food mimics the personality of the city. Thailand’s most traditional dishes include ingredients such as coconut cream, shrimp, chicken, sticky rice, mango, spicy peanut sauce, basil and rice noodles! One of their most famous snacks is Moo Satay. This savory treat is skewered pork that is broiled and coated in spicy peanut sauce, occasionally accompanied by a cucumber salad.

Bangkok is a popular tourist destination with no shortage of places to see and things to do. From their floating markets to their delectable street eats, one can easily stay busy in this beautiful city. Whether it’s just visiting for a day or staying for a week, make sure to take in all the history and beauty this city has to offer.

If you have any questions about this article or in-flight catering in Bangkok, Thailand, contact orders@airculinaire.com. For global in-flight dining options, download the ACW Menu app in the App Store or Google Play.