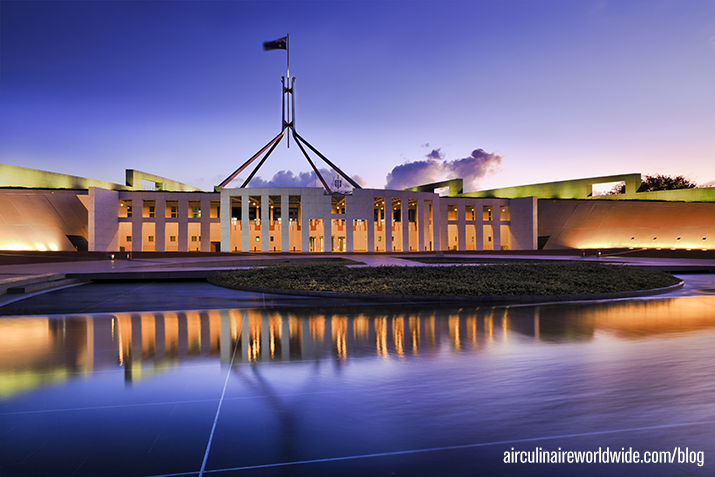 Canberra, Australia is the capital city of Australia and 8th largest city overall. Located inland about 200 miles from Sydney and 400 from Melbourne, this city is home to almost 400,000 people. Canberra’s population largely consists of political figures, government officials and those who work in industries such as media. Along with professionals, Canberra hosts some of the country’s most prestigious universities as well as galleries and museums. Peak travel season for this city is typically December and January with the shoulder seasons being September, November and February and April. Canberra is a great historic and cultural city that also is ideal for foodies and the local arts.

When working on a private aviation trip to Canberra, you will land at the Canberra Airport (YSCB), which is located less than 10 minutes from downtown. For inflight dining options on your departure from Canberra, your needs can be fulfilled through the Air Culinaire Worldwide® Network. As always, it is best to plan your inflight catering needs at least 48 hours ahead for the details of your next leg, especially during peak season. The easiest way to plan and order your in-flight catering is via the ACW Menu app, available for Apple and Android mobile devices.

Canberra is known for its history and culture, which can be found throughout downtown as well as in the outskirts of the city. One of its most famous attractions is Australia’s War Memorial. This memorial encompasses a world class museum as well as archives in order to commemorate those who have died in the war. After seeing the national war memorial, head over to the national art museum. Home to 170,000 iconic works of art, this museum has four main areas and has everything from Aboriginal art to American Art.

After taking in all the history this beautiful city has to offer, stop by Lake Burley Griffin. Walking the bridge and around the lake is a local favorite and it is the perfect place to catch some sunshine and fresh air. Although parts of the lake are ideal for a quiet picnic or stroll, this area always has something to do or an event being held.

After a long day out, make your way to Sage, one of Canberra’s most popular restaurants. Sage interacts with locals to provide the freshest and tastiness ingredients. Featuring a multitude of seafood fare, this restaurant curates some of the most unique dishes that satisfy every craving. For those who cannot get enough of Lake Burley Griffin, head over to The Boat House. This restaurant pairs impeccable views with delectable flavors for the ideal meal.

Canberra is a historic and cultural city that stays busy year round. Whether it is December or July, this beautiful part of Australia keeps visitors coming. Although it is not one of the biggest cities, it offers a true sense of Australian cultural that is unmatched.

If you have any questions about this article or in-flight catering in Canberra, contact orders@airculinaire.com. For global in-flight dining options, download the ACW Menu app in the App Store or Google Play.