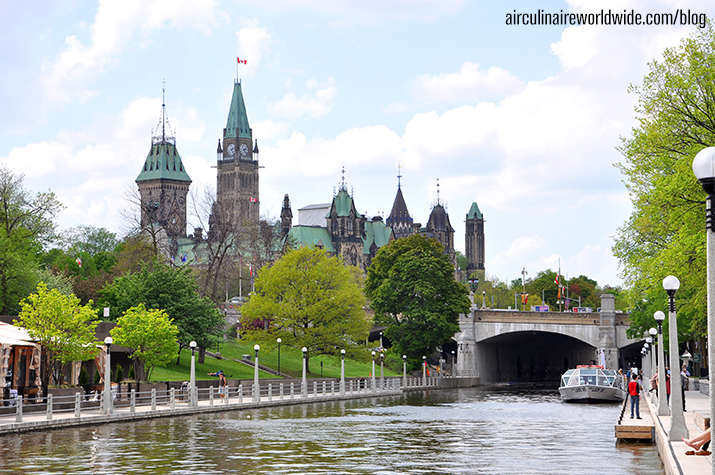 Ottawa, the capital city of Canada, is home to the Parliament of Canada which meets at Parliament Hill – pictured above. Due to Ottawa’s political and economic importance, changes are you could end up operating to the city on a business aviation mission any time of year. However, for general travel, peak season starts in May and ends in September.

Located in southeastern Ontario, on the south bank of the Ottawa River, Ottawa is the fourth most populated city in Canada. When working on a private aviation trip to Ottawa, you will land at either Gatineau-Ottawa Executive Airport (CYND) to the north of the city center or Ottawa Macdonald-Cartier International Airport (CYOW) which is south of the city center. During preparations for your trip, if crew or passengers require scheduled private transportation during your time in Ottawa, arrangements are available through Universal Private Transport. For inflight dining options on your departure from Ottawa, your needs can be fulfilled through the Air Culinaire Worldwide® Network. As always it is best to plan your inflight catering needs at least 48 hours ahead for the details of your next leg, especially during peak season.

There is no shortage of things to do in Ottawa. In May, the temperatures start to warm up, and the city hosts its annual Tulip Festival with over one million tulips in bloom. This event is much more than just the impressive and colorful display of tulips in bloom, Ottawa also celebrates with a regatta, live music, dance performances (including maypole, ballet and swing dance), painting workshops and more. Notable sites in Ottawa include Notre Dame Basilica, Rideau Canal (a UNESCO heritage site), Parliament Hill (including a visit to Peace Tower), the Canadian War Museum and the National Gallery of Canada.

Due to the large Lebanese population that has settled in Ottawa over the past half-century, a local take on shawarma (also called “donair”) is the most widely-popular food. Ottawa has a food trucks and nearly 300 stands of local vendors selling produce and other local products at ByWard Market. This location has been the place in town for makers and farmers to gather and sell their good for almost two hundred years. For a sweet treat, locals love BeaverTail, which is an oblong piece of fired bread topped in anything sweet – starting with cinnamon and sugar as a basic version and more unique versions that have anything from cheesecake, candy bar bits, hazelnut, peanut butter, cookies and anything else you can imagine as a topping. For drinks, Ottawa is home to several local breweries and a few vineyards.

If you have any questions about inflight catering for private jets in Ottawa, contact weborders@airculinaire.com.