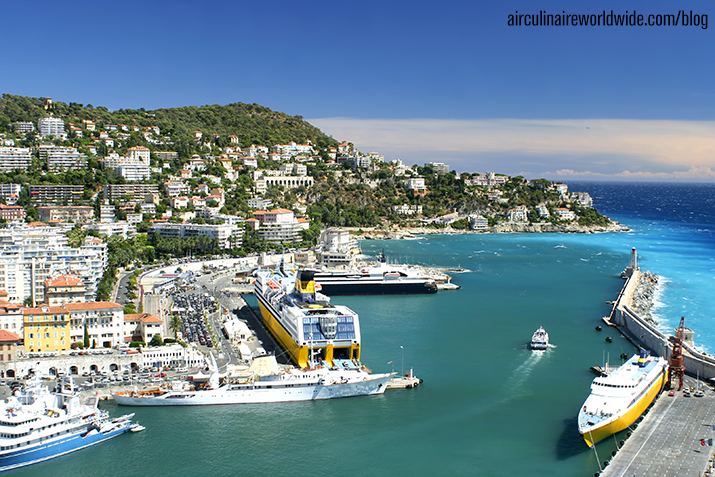 Located on the French Riviera, the city of Nice, France experiences its peak season starting in May and ending in August which coincides with its driest and warmest months. However, the months before and after peak season are also popular because of the mild Mediterranean climate that makes for pleasant weather nearly year-round.

When working on a private aviation trip to Nice, France, you will land at Nice Côte d’Azur Airport (LFMN). During preparations for your trip, if crew or passengers require scheduled private transportation during your time in Nice, arrangements are available through Universal Private Transport. For inflight dining options on your departure from Nice, your needs can be fulfilled through the Air Culinaire Worldwide® Network. As always it is best to plan your inflight catering needs at least 48 hours ahead for the details of your next leg, especially during peak season.

Nice, France is hopping with events and celebrations throughout the year. In September is “Journées du Patrimoine,” Heritage Days, when several governmental and historical buildings are open to public tours. This actually takes place in the 50 states of the European Cultural Convention, in case you happen to be in any of them at this time. There are music festivals, such as the Blues Festival and Festival MANCA, Fête de la Musique, Fête de Château, Nice Jazz Festival and more. Physical activities such as, rollerblading, marathons, triathlons, regattas and cycling all have special dates set for them annually.

When it comes to local cuisine in Nice, by far the most globally-recognized item is Salade Niçoise – the local salad in Nice. The Niçoise Salad originated in Nice and is comprised of hard-boiled eggs, tomatoes, Niçoise olives and anchovies in olive oil dressing. Ratatouille, another famous dish that was first created in Nice, is made of stewed vegetables, typically arranged in concentric rings. Other local favorites are Pan Bagnat, Salade Niçoise on a bun; Socca, shaped like a pizza and make of chickpea flour; Pissaladiere is appetizer item originally from Nice which is a thick bread dough topped with black olives, onions and anchovies. There are also food items that are traditionally French, such as crêpes, baguette, Pain au Chocolat and French Apple Pie (which is more like a tart).

If you have any questions about inflight catering for private jets in Nice, France; contact weborders@airculinaire.com.