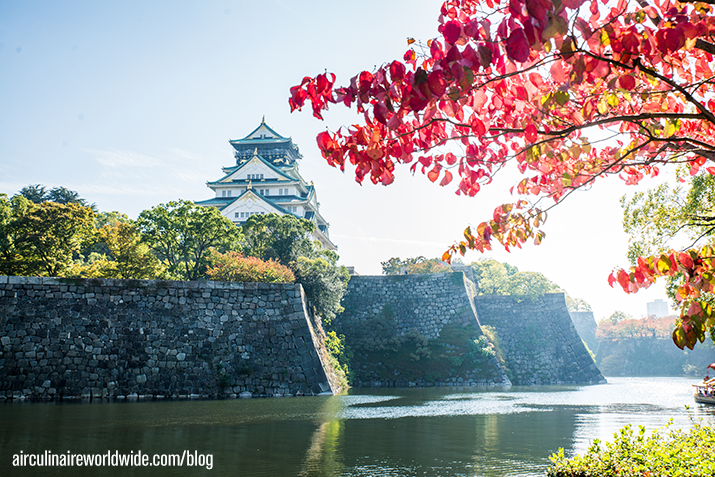 As the fall season takes place in the Northern Hemisphere, there are several places to take in some beautiful fall foliage. This spectacle can be witnessed in Osaka, Japan starting in mid-November, and coincides with peak travel season to Osaka. Located in the Kansai region of the Japanese island named Honshu, Osaka is a vital port city for the country.

When working on a private aviation trip to Osaka, you will land at Kansai International Airport (RJBB). During preparations for your trip, if crew or passengers require scheduled private transportation during your time in Osaka, arrangements are available through Universal Private Transport. For inflight dining options on your departure from Osaka, your needs can be fulfilled through the Air Culinaire Worldwide® Network. As always it is best to plan your inflight catering needs at least 48 hours ahead for the details of your next leg, especially during peak season.

Osaka is home to many exciting and colorful annual festivities. On January 9 – 11, each year since the 7th century, over one million people attend Toka Ebisu Festival in Osaka to celebrate Ebessan, a deity believed to bring good fortune for fishing, trade and business.

While many Americans may have visited Washington, D.C. to experience the National Cherry Blossom Festival of 3,000 cherry trees gifted in 1912 from a former mayor of Tokyo, Osaka has its own famous Sakura No Toorinuke event in mid-April where the cherry tree-lined street by the Japan Mint’s Banknote Factory. This spectacle started in 1883 and has over 120 species of cherry trees – some extremely rare.

On June 30 – July 2 is Aizen Matsuri which features food trucks and traditional dancing. On the fourth Saturday of July, Osaka Harbor has a large firework display for the festival of Kishiwada Harbor. This event features 10 minutes of stunning and vibrant fireworks with an amazing grand finale. In late July is also Tenjin Matsuri, festival of fire and water, one of the county’s largest events. This event if filled with boats, parades and of course – more fireworks! Following closely behind in early August, is Naniwa Yodogawa, a summer fireworks festival that draws a large crowd.

The crown jewel of local cuisine in Osaka is Takoyaki – round dumplings filled with octopus, ginger, spring onion and tempura flakes with a sweet brown sauce, topped with mayo, nori and bonito. This dish was invented in Osaka at Aizuya back in 1935 by its founder, Tomekichi Endo. Okonomiyaki, another local favorite, is a pancake-style dish with savory ingredients like seafood, pork, cheese, cabbage and tomato; topped with brown sauce, mayo, nori and bonito. Fugu, blowfish, is a local delicacy that is infamous for its ability to be poisonous when not prepared correctly. Fugu can be served in a variety of styles, but the traditional way is in thin slices, shingled around a plate. Kushikatsu are balls smaller than Takoyaki that are skewered and made from a variety of items that have been deep fried. Common ingredients are shiitake, bacon-wrapped asparagus, lotus root, quail eggs, pumpkin, sweet potato, beef, pork and shrimp. Kushikatsa Darume is the restaurant credited with inventing this dish ins 1929. Yakinika is thin-sliced beef that is barbecued on a charcoal grill and dipped in sauce. All of these dishes and many more are easily found all around Osaka, so be ready for a culinary adventure!

If you have any questions about inflight catering for private jets in Osaka, Japan; contact weborders@airculinaire.com.