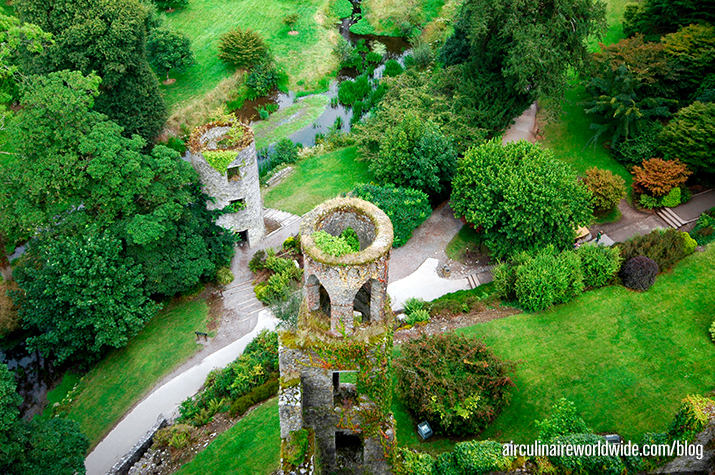 County Cork, home to Blarney Castle, is located on the southwestern portion of the island nation of Ireland. Located within the country is a city also named Cork which is bisected by the River Lee. With St. Patrick’s Day coming up soon, followed by summer peak travel season, this is the perfect time to explore this popular Irish destination, affectionately called the “Rebel City.”

When flying to Cork, Ireland on a private jet you will arrive at Cork Airport (EICK) which is located in the southeastern area of the city. During preparations for your trip, if crew or passengers require scheduled private transportation during your time in Cork, arrangements are available through Universal Private Transport. For inflight dining options on your departure from the Emerald Isle, your needs can be fulfilled through the Air Culinaire Worldwide® Network. As always is it best to plan at least 48 hours ahead for the details of your next leg, especially during peak season.

Cork culture can be found through a variety of annual events. Each year for St. Patrick’s Day there is a celebration with a parade, in Cork. For one week in June, maritime heritage is front and center with the Cork Harbour Festival. Cork is known for its rich maritime history. One event during this week is the Ocean to City long-distance rowing race featuring hundreds of boats. Also during June, but set for two weeks, is the Cork Midsummer Festival, featuring visual arts, music, dance, opera and more. Later on, in October, is the Cork Folk Festival in which musicians from all around Ireland perform throughout the week. In November, you will the Cork Film Festival that has been going strong since 1956.

Not only is the landscape of Ireland beautiful, but so are the historic sites. Blarney Castle is not far outside of Cork and is the most globally-recognized building in this area. There, you can kiss the Blarney Stone in hopes of gaining the gift of eloquent speech. There is also the Opera House, castles, forts, parks, cathedrals, parks and islands to explore. When you are ready to explore cuisine, you will be happy to know that Cork is known as the food capital of Ireland. The first stop on your culinary adventure should be the English Market which has been the epicenter of local cuisine since 1788. This covered market has over 50 stalls featuring traders selling an assortment of food items such as fish, meat, fruit, vegetables, cheese, pasta, chocolates, cakes and more. Traditional Irish dishes to be on the lookout for locally are Irish Stew, Shepherd’s Pie, Boxty (a potato pancake), Coddle (sausage, bacon and potato) and Colcannon (mashed potatoes with kale or cabbage and butter).

If you have any questions about this article or inflight catering in Cork, contact weborders@airculinaire.com.