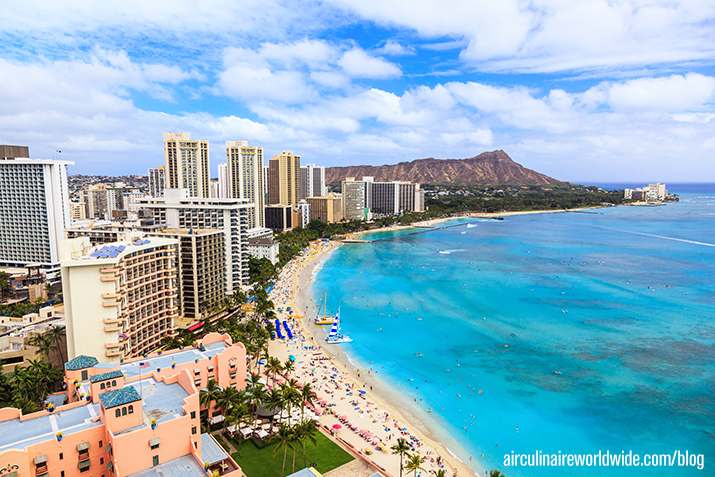 One of the most iconic tropical getaways in North America, Honolulu’s crescent beach is the perfect backdrop if you are not so interested in a white Christmas. Hawaii’s peak travel season starts in December and lasts through April, but with temperatures in the 80s year-round, it is perfect to visit this town on the island of Oahu during any month.

When operating to Honolulu, you will arrive at Honolulu International Airport (PHNL). If you need scheduled chauffeured ground transportation, Universal Private Transport has options available that you can utilize throughout your time in Honolulu. When it is time to prepare the details of your departing flight, inflight catering for private jets is available at Honolulu International Airport through the Air Culinaire Worldwide Network.

While Christmas and New Year’s Eve are celebrated in December, you will find Chinese New Year is also an important cultural event in Honolulu. In Mid-March each year you will find the Honolulu Festival underway; this cultural event is full of local handicrafts, dancers and artists. If you are in Honolulu Islands on May 1st, you can experience Lei Day in Waikiki at Queen Kapi’olani Park where you will hula dancers, live music handicrafts and local food. Following on the heels of Lei Day is Mele Mei, which is celebrated throughout the month of May. On Memorial Day, which is a holiday celebrated throughout the United States on the last Monday of May, a Lantern Floating Festival is held at Ala Moana Beach Park in Honolulu. King Kamehameha day is June 11th, and this is observed with a parade on the closest Saturday to the holiday. For two days in mid-July is the Prince Lot Hula Festival at the Moanalua Gardens, this is right in time for the Ukulele Festival at the Waikiki Bandstand. September is when the Aloha Festivals are held for an entire week of local music and cultural celebrations. On a somber note, Pearl Harbor Remembrance Day is held on December 7th each year to honor those lost.

Being a tropical island in the Pacific, you can already imagine what Honolulu’s local cuisine’s ingredients might be and the cultural influences you will find in the flavors. Coconut, taro, pineapple, tuna, blue marlin, swordfish, groups, red snapper are some of the popular types of fish. Octopus, squid and other types of seafood are also eaten. Pork, beef and chicken are also part of local cuisine; although they were not indigenous, they were brought to the islands over the past few hundred years. Teriyaki, five-spice powder, wasabi and soy sauce are all commonly used, but the local spices are chili pepper water (chili peppers, salt and water), huli-huli sauce (pineapple ketchup, soy sauce, brown sugar, sesame oil, garlic and ginger) and aloha shoyu (a local take on soy sauce).

If you have any questions about this article or inflight catering in Honolulu, contact weborders@airculinaire.com.