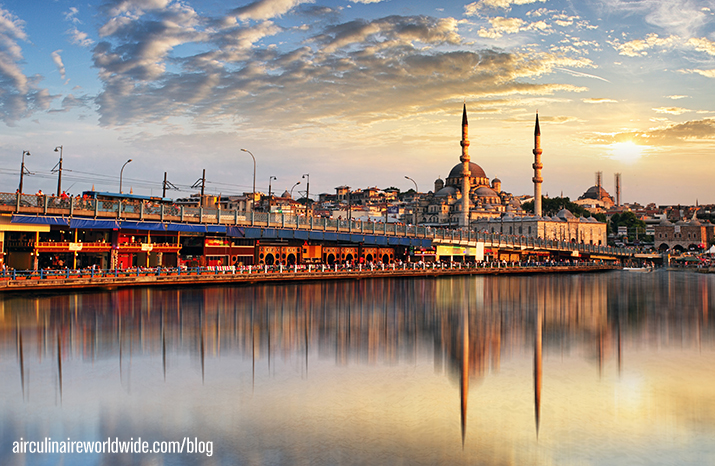 Istanbul is one of the most geographically-unique cities on the planet, with the Bosphorus Strait running through the city which is also the continental marker of where Europe and Asia meet. Steeped in a long history and rich culture, Istanbul has been around since at least 660 B.C., when it was founded with the name Byzantion. Since then, the city has served as a capital during the Roman, Byzantine and Ottoman Empires. Today, Istanbul remains the country’s most powerful and populous city with about 15 million citizens. The months of spring and fall are considered peak travel season for Istanbul, but there are many reasons to visit throughout the year.

When operating to Istanbul, you will land at Istanbul Ataturk Airport (LTBA) on the European side of the city or Sabiha Gokcen International Airport (LTFJ) on the Asian side of the city. When you are ready to depart, inflight catering is available through our local vendors in the Air Culinaire Worldwide Network. In addition, we now have an ACW Network menu we have worked with our LTBA vendor with, for flights departing Istanbul Ataturk Airport. This menu is available through August 2018.

With millennia of history and culture comes countless tours and places to sightsee. Some of the most popular historic and architectural sites are the Hagia Sophia (a museum that was one a church and then a mosque, which has tombs of sultans), the Blue Mosque (also known as “Sultanahmet Camii” or “Sultan Ahmed Mosque,” was built in the 1600s and has intricate blue tile work), Basilica Cistern (an ancient system of providing drinking water), Topkapi Palace (overlooking the Bosphorus Strait, the Sea of Marmara and the Golden Horn Inlet, this palace was home to generations of sultans and their families)  and the Grand Bazaar (a covered market that spans over 60 streets and has over 4000 shops; be prepared to haggle).

When you are ready to experience local cuisine, get ready to be delighted by the fresh and healthy focus on this unique style of cuisine. A traditional Turkish breakfast usually is comprised of tea, tomato slices, cucumber, grain-laden bread, olives, a variety of cheese, honey, eggs (most likely boiled or made into an omelet) and other elements that complement the flavors. Menemen, the traditional omelet, is made with eggs, peppers, tomatoes, herbs and onions. Meze, a style of food that is similar to tapas or starters in its usage, are popular; you can find many restaurants referred to as “meyhane” that focus on serving this category of Turkish cuisine. Kebaps (Westernized into “kebabs”) are probably the most widely-known of Turkish cuisine around the world. Be sure to try the authentic variety when visiting Istanbul, Turkey.

If you have any questions about this article or inflight catering in Istanbul, contact weborders@airculinaire.com.