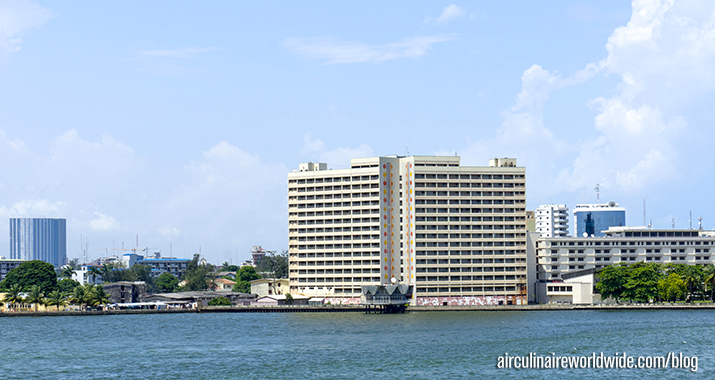 Lagos, Nigeria is known for having two distinct rainy seasons, with December through March being in between them. Even with some rain, summer is the peak season to travel to Lagos which is the capital of Nigeria and is located on the coast of the Gulf of Guinea. As business aviation continues to grow in Africa, it is a good time to learn about one of the top destinations on the continent.

When operating to Lagos, you will arrive at Murtala Muhammed International Airport (DNMM) which is located northwest of the city center. During preparations for your trip, if crew or passengers require scheduled private transportation during your time in Lagos, arrangements are available through Universal Private Transport. For inflight dining options on your departure from the Lagos, your needs can be fulfilled through the Air Culinaire Worldwide® Network. As always is it best to plan your inflight catering needs at least 48 hours ahead for the details of your next leg, especially during peak season.

Annual events in Lagos are mostly focused around local culture, commerce and the arts. Lagos is known for having the largest carnival celebration in West Africa. This event is also called “Fanti” or “Caretta,” and takes places during the Lagos Black Heritage Festival which is a week-long celebration during the month of April. Felabration is a unique local music festival named after human rights activist and musician, Fela Kuti, which lasts one week each October. Another one-of-a-kind event in Lagos is the Eyo Festival, also called the “Adamu Orisha Play,” which features costumed dancers.

Cuisine in Nigeria is influenced by the multitude of ethnic groups that call Nigeria home. Meat, rice and beans play a prominent role in many dishes, and soups and stews are plentiful. Some Nigerian meat specialties you may find in Lagos are Kilishi (thinly-sliced meat covered in a paste of chili peppers herbs and spices), Tsire (sometimes skewered, this preparation of meat involves a peanut-chili powder coating) and Suya (skewered meat that has been grilled on a barbecue and given a coating of chili pepper, peanut and spice). A popular bean-based soup in southwest Nigeria is “Gbegiri” which is a Yoruban dish made with black-eyed beans or brown beans. Locally-grown rice is commonly served with stews, and other types of rice popular in Nigeria are coconut rice (rice made in coconut milk), fried rice (mixed with eggs, vegetables and can be mixed with different types of meat or seafood) and jollof rice (made with pepper and tomato).

If you have any questions about this article or inflight catering in Lagos, contact weborders@airculinaire.com.