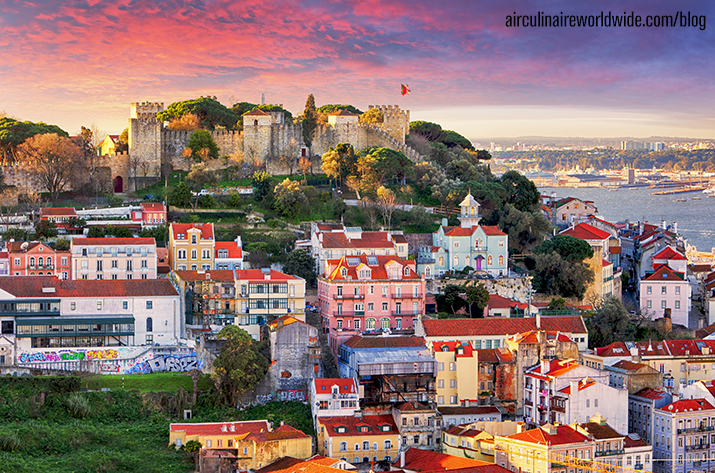 The natural beauty of Lisbon, the capital city of Portugal, is a sight that leaves a life-long impression on its visitors. Situated on the Atlantic Ocean coastline of the Iberian Peninsula and the River Tagus, it is easy to how the country has given birth to so many famous historical maritime explorers. While summer is in full-swing in the Northern Hemisphere, so is the peak season for traveling to this inspiring location. Even though Lisbon has a relatively mild climate during winter and its shoulder seasons, it is July and August that sees the most jet activity and the same can be said about the local beaches.

Known as continental Europe’s westernmost capital city, private aviation traffic is serviced by two airports, Cascais Aerodrome (LPCS / LCT) to the west and Lisbon Portela Airport (LPPT / LIS) to the northeast. Private jets departing either of these airports have in-flight catering services available to them through the Air Culinaire Worldwide Network. Peak times for in-flight catering not only include the July and August season, but also countrywide and local annual events like Dia da Liberdade, Festival of Santo Antonia, the Estoril Open and Carnival.

History enthusiasts, if this is your first time planning a trip to Lisbon you will be thrilled to learn it is one of the oldest cities in the world, having been continuously inhabited since 1200 BC. If you really want a limited-time experience, be sure to contact Tourism Services to ask about the annual dates for the opening of the Roman galleries (Galerias Romanas). For only one weekend per year, they unlock a door in the middle of the street named Rua da Conceição where you will descend into a network of chambers that date back about 2000 years. If you are interested in Roman history, you will also want to visit the Roman Theatre Museum (Museu do Teatro Romano) to see the ruins of a theatre built during the time of Emperor Augustus. Billed as a “key monument to understanding Lisbon,” King Dinis’ Wall is a national monument where you will not only get to see a medieval wall but also experience over a thousand years of local history in the exhibit area. Of course, with such a long history, there are countless important cultural and historical sites to check out. Some examples are the Campo Pequeno Bullfight Arena (Praça de toiros) with its iconic Neo-Moorish architecture, the Igreja de São Domingos – a church that has hosted royal weddings within its Baroque-style construction, Elevador Santa Justa being one of the highest points in Lisbon that gives views all the way out to the River Tagus, São Jorge Castle – a Moorish hilltop castle, and Belém Tower (Torre de Belém) – a UNESCO World Heritage monument.

White the landscape and history are spectacular here, of course, we also want to cover another huge part of the culture – Portuguese cuisine and local delicacies. Portugal is known for its cheese (queijo) and Queijo Serra da Estrela, a unique cheese made of sheep’s milk and utilizes a thistle-like plant as a coagulant, is known as the king of Portuguese cheese. It is one of thirteen classes of cheese produced in Portugal that is included in the European Union’s protected designation of origin (PDO) classification. Some others that have received this distinction are Queijo de Azeitao (also of sheep’s milk and cardoon – a thistle-like plant), Queijo São Jorge – a semi-hard cheese made from cow’s milk, Queijo Rabaçal – a hard cheese made from ewe’s and goat’s milk and Queijo do Pico – a soft cheese made from unpasteurized cow’s milk. This is just one example of many categories of food items that are part of local cuisine. The country also has a long history with petiscos (tapas), bread, pastries, wine, enchidos (cured meat and sausage) and more.

If you have any questions about this article or inflight catering in Lisbon, Portugal, contact weborders@airculinaire.com.