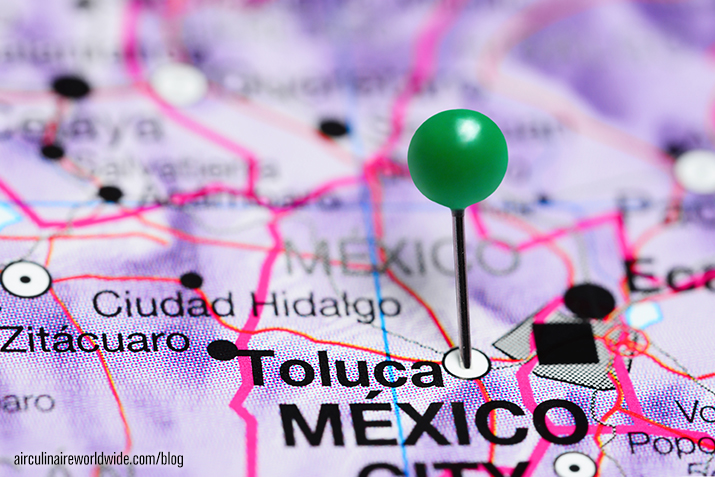 Located in central Mexico, about a 90-minute drive west-southwest from Mexico City, you will find Toluca. Toluca de Lerdo, commonly shortened to “Toluca,” is the capital of the state of Mexico and is home to an estimated 820 thousand residents. The city has been in a boom phase as part of the vital manufacturing industry that the area is known for, because of this more business aviation flights have been operating to Toluca. Whether it is manufacturing a can of soda, a luxury vehicle or anything in between, a growing number of global corporations have been setting up operations in the Toluca area.

During the colder months in the Northern Hemisphere, the country of Mexico sees and increase in both commercial and private aviation flights. When operating to Toluca, Mexico you will arrive at Licenciado Adolfo López Mateos International Airport, which is commonly shortened to Toluca International Airport (TLC / MMTO), which boasts the longest runway in the country. The airport itself is outfitted to serve about 6 million passengers per year and has a handful of FBOs, including Universal Aviation, Jetex, Asertec and Aerolineas Ejecutivas. When you are ready to make departure arrangements, inflight catering is available at Toluca International through the Air Culinaire Worldwide Network of inflight catering vendors.

If you have extra time on the ground in between your arrival and preparations for your next leg, Toluca holds some unique archeological, cultural and artistic gems to explore. One of the most visited and highly-rated sites is the Cosmovitral Jardin Botanico, a botanical garden with carefully thought out landscapes and water features surrounded by stunning stained-glass artwork. For a glimpse into the lives of the Mesoamerican Aztec people, plan a visit to Calixlahuaca, an archeological site featuring temples and structures with a nearly 1000-year history. Of course, as with any major city, Toluca is also home to a handful of museums, such as the Museo del Alfenique de Toluca, where you can view creations made out of sugar paste, with the theme of La Dia de los Muertos or the Museo de la Acuarela, which is dedicated to celebrating the art of Mexican watercolor painters.

When it comes to local cuisine, Toluca is best known for its smoked cured meat and sausage, with chorizo and carne de Obispo being the most popular choices. Typical animal proteins are chicken, pork and beef, which are commonly mixed with fresh local herbs and spices like purslane, papalo (similar to cilantro), spinach (how green chorizo gets its distinct color) and watercress. If you are looking for a quick bite, find a restaurant that serves “tortas,” a sandwich with a roll-like bun that typically has an animal protein (like chorizo) with a variety of toppings (like tomato and avocado) and melted cheese. There are many places to find them and a great debate on who has the best torta in town. The traditional drink of Toluca is “Moscos,” an orange liqueur, is easily found throughout town and can serve as a special touch onboard if your passengers enjoy these types of fruity drinks.

If you have any questions about this article or inflight catering in Toluca, contact weborders@airculinaire.com.