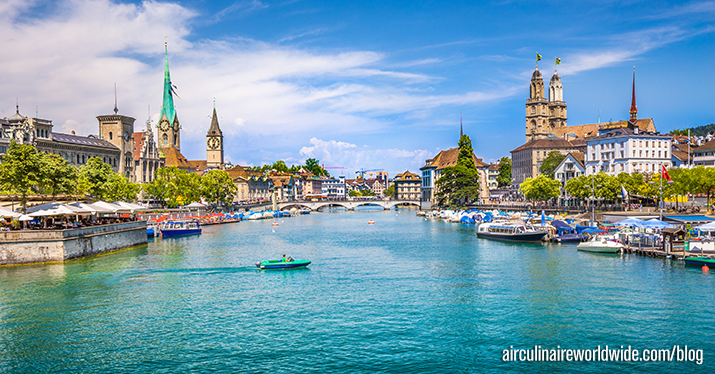 With pleasant temperatures and beautiful scenery, one of Europe’s hottest summer destinations is none other than Zurich, Switzerland. Being Switzerland’s most populous city, Zurich is also its financial center. Located on Lake Zurich in the north-central area of the country, peak season is in full swing from June through September. This makes it is the perfect time to learn more about this German-speaking city.

When operating to Zurich, you will arrive at Zurich Airport (LSZH) which is located north of the city center. During preparations for your trip, if crew or passengers require scheduled private transportation during your time in Zurich, arrangements are available through Universal Private Transport. For inflight dining options on your departure from Zurich, your needs can be fulfilled through the Air Culinaire Worldwide® Network. As always is it best to plan your inflight catering needs at least 48 hours ahead for the details of your next leg, especially during peak season. Currently, we have an inflight dining menu available in Zurich for departing flights, via the Air Culinaire Worldwide Network.

Being repeatedly voted as one of the best cities in the world to live in, it comes as no surprise that Zurich has a jam-packed calendar of events throughout the year. In spring is ZuriCarneval, the Zurich Marathon, Zurich Spring Festival, Zurich Festival and more. Summer, being the busiest time of year by far has the most events, such as Live at Sunset Festival, Zuri Triathlon, the Urban Festival, Street Parade, Weltklass Zurich, Zurcher Theatre Spektakel and the Zurich Film Festival. Fall season features Art International Zurich, Jazznojazz, Zurichsee Festival, Swiss Cup Zurich and Zurich Car Show. Winter is the setting for the annual Christmas Market, New Year’s Magic, New Year’s Run, International Horse Show and Art on Ice.

Switzerland is the home of muesli, a healthy breakfast item like cereal that is made with rolled oats and grains, that is typically eaten on Sundays. Another uniquely Swiss breakfast item is rosti; similar to hash browns and served mostly with eggs and bacon. Swiss cuisine is known the world over for its amazing cheese. This is especially prevalent in the fondue tradition. Diners delight over a pot of melted cheese to dip bread and socialize. Raclette is another cheese-based dish, but this is cooked over a grill also called a “raclette,” so that the slices of cheese melt. This is then served with gherkins and boiled potatoes. Tartiflette is a newer local dish that features sliced potatoes, bacon, caramelized onions and Reblochon cheese. Popular on cold days, Zurcher Geschnetzeltes is a dish made of veal, calves’ kidneys, sweetbread and an onion-mushroom gravy. Zurich has many culinary delights to explore, so be sure to try out at many local delicacies as your time on the ground allows.

If you have any questions about this article or inflight catering in Zurich, contact weborders@airculinaire.com.