Getting to Know Austrian Soups 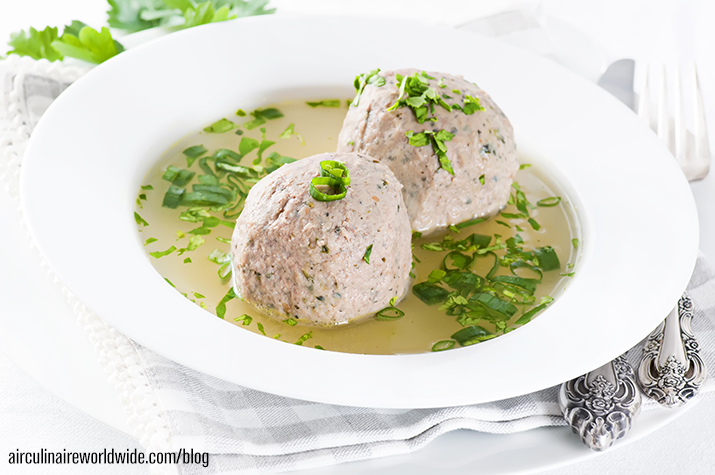 If you have visited Austria and had a chance to eat “Tafelspitz,” then you have already experienced one of the most authentic dishes of this country. The Emperor’s favourite dish is a two-in-one meal. It’s not just an appealing taste, but a very entertaining dining ritual that creates such a demanding popularity. A first course is an incredibly mild and tasteful beef broth, followed by simmered beef, accompanied by creamy chive sauce and freshly-prepared apple-horseradish mousse. The meat must come from a young ox, assuring the tenderness of the beef and the essence of a soup broth.

In Austria, a clear beef broth is the cornerstone of traditional cuisine and is added to various soups. If you are thinking whether or not you should include a soup in your in-flight menu, don’t hesitate to do to so. A clear broth helps the stomach digest easily and also builds a better appetite. Depending on the preferences of your customer, you can choose from numerous ingredients to add to make the soup taste exceptional.

Dumplings (Knoedel or Knödel) are the most popular ingredients to add to a soup in Austria, where ‘dumpling making’ is a culinary profession. Soup adding are usually prepared in advanced and preserved in a freezer until needed.

Leberknödel is one of the most popular ingredients, which is a liver dumpling, shaped and formed into a round ball. Liver dumplings are rich in vitamin A, B5, B6, B12 and iron. One or three is a standard serving portion for a soup.

Bratknoedel is another traditional dumpling. A wholesome mixture is roundly-shaped, and made with loaf bread, fine bits of ham and sautéed chopped onions. The Bratknoedel soup is found in many regions of the Alps. A comforting soup that will warm your soul.

Fleischstrudel is a meat strudel; a fantastic ingredient to add to a soup. The preparation is similar to apple strudel: a thin pastry sheet, layered with seasoned minced beef is rolled together and baked in an oven. One or three slices make a standard serving portion for this soup.

Frittaten are thin crepe noodles. This is a very easy and uncomplicated way to refashion a clear broth.

Schöberl is an egg-based thin flat pie, baked in an oven and then cut into rhombus shape pieces, ready to be served.

Griessnockerl is the ultimate choice for gluten-free lovers. The dumpling is made of corn flour, the one used for quick grits sold in most grocery stores in USA.

Be sure to specify if the broth should be strictly vegetarian.

To preserve the freshness of the ingredients, ask the caterer to pack dumplings separately. Be sure to specify whether it is oven or microwave you will be using to warm up. The clear soup broth might be delivered in a plastic bottle or round container.

The dumplings and extra garnishes, such as sliced carrots and root veggies, go first. How much is a question which is fully up to an individual to decide. If a soup tastes good, then you have done an excellent job finding an authentic first course from Austria.

Some cream soups are widely-served in Austria. Pumpkin or a squash cream soups are in season from late summer until winter. Hokkaido pumpkin is something we recommend trying if you have not.

White or green asparagus cream soup is the best from early April until mid-July, as it is hugely harvested by local farmers. Other than that, the global exports are making it available in Austria pretty much all year around.

Wild garlic soup is something very special, available in spring when Austrians go in the near woods to pick these fresh herbs directly from their natural habitat. Nevertheless, wild grass or bear’s garlic is commercially-available during from April until early June.

If you have any questions about this article, contact Irina Samsinger at i.samsinger@magnumhandling.com