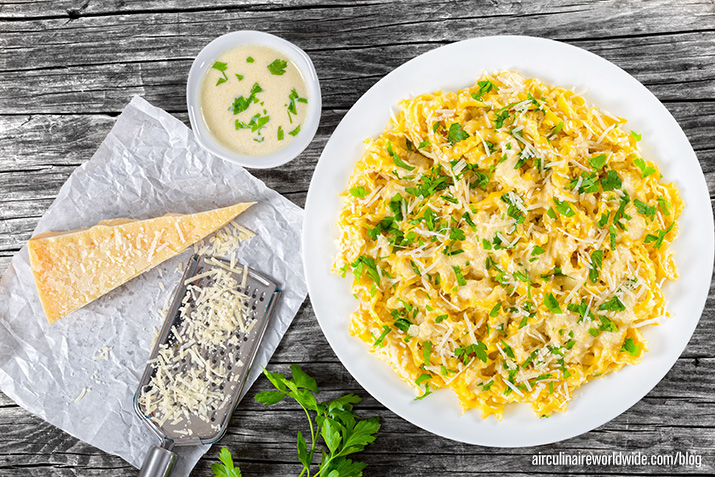 A pregnant lady, a chef and a silent movie star walk into a restaurant… sounds like the beginning of a joke but the birth of Fettuccine Alfredo is no laughing matter.

The chef we speak of is Alfredo di Lelio of the restaurant named Via della Scrofa in Rome, Italy. The pregnant lady was his wife, Ines, who was constantly sick while carrying their second child and was having a hard time keeping food down. Alfredo would make a very simple peasant-style dish called “Fettuccine al Burro,” fettuccine tossed with whole butter and parmesan cheese. This became her go-to meal during her pregnancy. Reluctantly, Alfredo added it to his restaurant menu (he thought it was too low class) and his customers gratefully responded.

Enter in the last bit of the formula of menu legend… two of Hollywood’s leading silent movie stars, newlyweds Mary Pickford and Douglas Fairbanks. While on their honeymoon, the couple ate at Alfredo’s restaurant and ordered the simple pasta. They enjoyed the dish so much, they asked for the recipe and returned to the United States with it. Back at home, they extolled the greatness of this dish to their friends and other movie industry types, and declared Alfredo as the “King of the Noodles.” When the Hollywood press got ahold of the story, they printed it and almost immediately, Alfredo’s restaurant was the place to go when in Rome for the elite traveler.

If you journey to Italy, you will only find Fettuccine Alfredo at limited locations, such as the Alfredo restaurant. Everywhere else you will have to ask for the dish as it is known by the Italians, fettuccine al burro, fettuccine burro e parmigiano, or pasta in bianco.