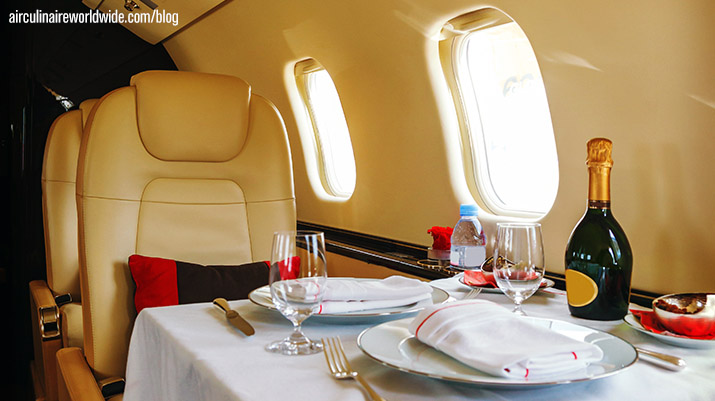 At any point, people will say that the quality of airplane food ranks near your local cafeteria level. However, when paying upward of $8,000 an hour to charter a private jet, the food quality can no longer be an item that is considered excusable. Ever since passengers have been flying, they have been somewhat disappointed by the standards in the entire inflight meal experience. What are private aviation companies doing to change this experience?

In the early days of flying, there was not much to do but nap, read a book and eat. There was not much in the way of onboard entertainment, so airlines used the same methods as other modes of transportation: they turned to food. It was common during the post-World War II era to be served a multi-course meal on a flight. As airline flights got cheaper, airline operators found themselves with more people to feed, making that level of dining unstainable. As the technology behind flights increased, it allowed for the planes to fly faster and carry more people. Therefore, economy class was born, and with that came the decline in the quality of food for the masses. First-class fliers could still get a more elaborate meal since they paid for the privilege. However, their enjoyment of the food declined as technology increased, as well.

Older flights might have been slower and bumpier, but the cabins were not pressurized. Nowadays, cabins of airplanes are pressurized with an extremely low humidity level of just 4 percent, largely to reduce the risk of internal corrosion. The only humidity in the airplane comes from other people’s breath. The problem with humidity it that causes your sinuses to close. This is why you often feel as if you have a cold or flu when flying or after getting off the plane.

Most people don’t realize that your sense of smell is the first element of eating. So, when you fly, your sense of taste is not the same as it is when eating in a restaurant. In addition, humidity also dries out your food. The fact that air in the cabin is recycled about every two or three minutes (plus air conditioning), can dry up or cool down food quickly. Smell and moisture are important aspects of the way we taste and appreciate the meals that are in front of us.

Most planes do not have full kitchens, so the food is precooked or par-cooked, and kept at temperature since they cannot do spot cooking. The shortest hold times are usually 60 to 90 minutes. With that said, delicate proteins, vegetables and some starches tend to lose texture and break down easily. Now, take into account the immense variety of dietary restrictions that most passengers have aboard flights. Sandwiches and wraps can be done well on short flights, but it is hard to be done well when you run into sogginess problems on long flights unless they are very dry. Let’s not forget that some vegetables are sensitive to temperature too, like lettuce.

What is the solution to these problems? It is all in the sauce, spices and seasonings. Private aviation companies are turning to cuisines, such as Indian dishes like curries over rice, stews and lentils. They can be done to hold well and they favor the combinations of moist sauces with enough spices to blast right through a passenger’s walled up sinuses. A skilled chef can get around these problems by seasoning their food with sea salt and packing their recipes with rich umami flavors, using ingredients such as soy sauce, shitake mushrooms and slow-cooked stocks.

Remember though, cooking for private jet passengers is not only about flavor, more importantly, it is about hygiene and safety. Sometimes food can sit in what is known as the “temperature danger zone” for longer than its threshold of 90 minutes. This is especially a concern if food is being ordered from a local restaurant to be held onboard until serving. Of course, no multinational corporation would want their executive to be sick during one of their important business meetings due to food safety issues.

That is why more private aviation companies are turning to companies like Air Culinaire Worldwide to assist in their emphasis on training their corporate flight attendants to make sure they all have food safety certifications and that they are properly handling the food provided by private aviation caterers. Part of dining in the air is planning ahead, which includes proper packaging. This can range from pre-assembling a Tuna Niçoise Salad to allow the passenger to pour their own sauce or paying attention to details like understanding that corporate flight attendants work with smaller workstations and may only be able to heat one meal at a time. Restaurants and private jet catering companies are understanding that the food needs to be cold packed and stored at the FBO (private jet terminal) until it is ready to be loaded on the plane. Air dining chefs prepare dishes to its midpoint, allowing cabin crewmembers to finish the dish onboard according to step-by-step photos. The majority of private jet customers are requesting items, such as simple fruit and vegetable spreads, cheese and crackers, and items that seem to hold well under the pressure of the cabins. Companies like Air Culinaire Worldwide are going to great lengths to get the procedure for making the passengers’ catering experience absolutely right!

If you have any questions about this article or about in-flight catering in the DC area, contact weborders@airculinaire.com.