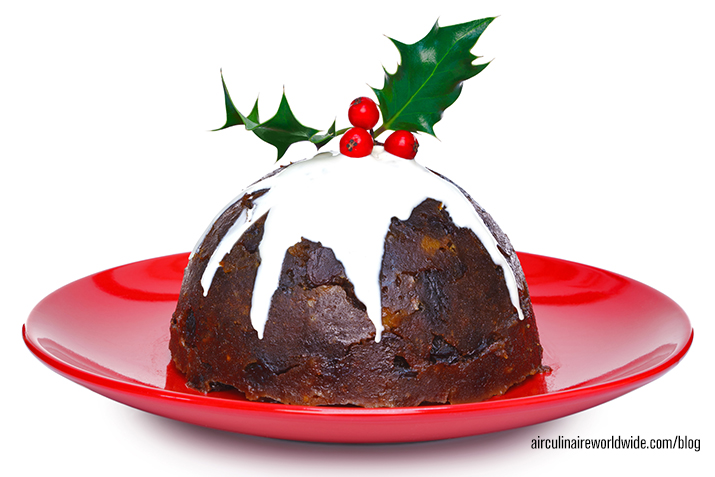 Once the main course has been enjoyed, followed by a suitable break to aid digestion (which usually includes traditional parlour games, such as charades), it is time to move onto the dessert, which must of course be the English Christmas Pudding, Plum Pudding or Figgy Pudding – as the song goes!

The pudding originated in the 14th Century and was quite different to the pudding we serve today. Originally, it consisted of beef, mutton, prunes, raisins, currents and spices, and was runny in consistency – almost porridge-like.

In the 15th Century, we began to add eggs, breadcrumbs and more dried fruit to thicken the texture. Beer and spices were added for flavour. In 1664, the pudding was banned by the puritans, but it was reinstated in 1714 by King George I.

The Sunday before Lent, which is five weeks before Christmas Day, is when the pudding was traditionally made and has become known as “Stir Up Sunday.” Every member of the family is involved in stirring the pudding; each of them making a silent wish for the New Year ahead.

Another tradition is to place a silver sixpence (or, more recently, silver charms) inside the Christmas Pudding to bring luck to whoever may be the recipient in their desert. Charms are a little different and may include a silver thimble which, if found by a single lady, it is believed she will remain single for the forthcoming year. The gentleman’s version of this would be a Batchelor’s Button. Make sure the money or charms are well-wrapped in grease-proof paper if you choose to add these to your pudding.

The pudding would be wrapped in muslin and steamed, which is still the best method of cooking for Christmas Pudding to this day. This process helps it to retain moisture and allows all the flavours to infuse.

We often now choose to pour a little brandy over the pudding and set it alight when serving. This adds a little theatre to your Christmas Day celebrations, but take when lighting it.

Finally, serve your pudding with a rich rum sauce. Recipes for the Christmas pudding, rum sauce and a special festive beverage are detailed below.

Of course, Christmas Day would not be complete without a glass of Mulled Wine. Serve to your guests as they arrive to warm them through until dinner is ready.

The wine should be served warm but not too hot. You can use an insulated flask to serve the wine from and keep it warm.

Don’t forget to wear your Christmas jumper! National Christmas Jumper Day in England this year is going to be Friday the 16th of December! People from all over the country wear their Christmas jumper and donate money to charity. Many schools and businesses get involved which makes it a great way to raise money while having fun.