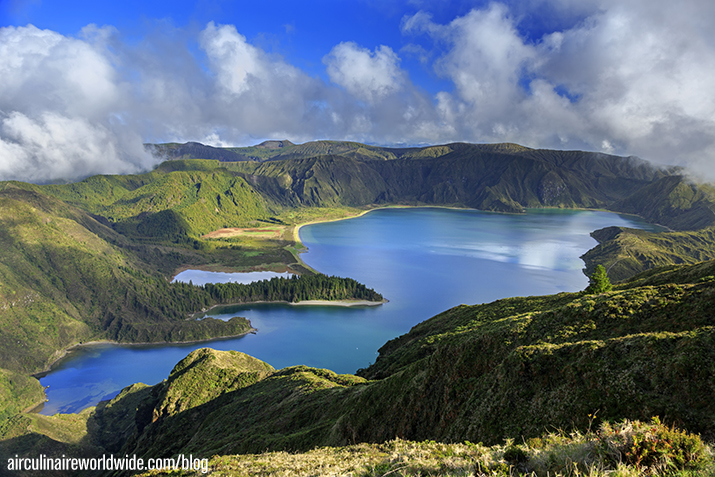 Cape Verde, also called Cabo Verde and officially called the Republic of Cabo Verde, is a volcanic archipelago located west of Senegal’s Cape Verde peninsula. The ten islands that make up this nation are marked with a vibrant culture which is influenced by Western Africa and Western Europe, especially Portugal.

When working on a private aviation trip to Cape Verde, you will land at Amilcar Cabral International Airport (GVAC). For inflight dining options on your departure from Cape Verde, your needs can be fulfilled through the Air Culinaire Worldwide® Network. As always it is best to plan your inflight catering needs at least 48 hours ahead for the details of your next leg, especially during peak season.

Cape Verde offers visitors a variety of natural features to explore, ranging from beaches and desert landscapes to craters, lakes and volcanos. While the islands do experience a windy season from October to July and a rainy season in August and September, the nearly year-round sunshine and pristine views make Cape Verde a popular destination almost any day of the year.

Music is an important part of local culture, and has given birth to “morna,” a unique type of dance music in which lyrics are performed in Cape Verdean Creole accompanied by guitar, piano, violin, accordion, clarinet and cavaquinho (a stringed instrument of Portuguese origin, similar to a lute). Cape Verde is also home to several colorful and entertaining annual celebrations – many of which are centered on music – such as, Carnival, The Flag Feast, Tabanka, The Festival of Sao Joao, Gamboa Festival, The Violin Festival, Baia das Gatas, Sal Music Festival and Sete Sois e Sete Luas.

Cuisine in Cape Verde is another way to take in the local culture’s blend of influences. Here you will find popular dishes like “feijoada” (a hearty bean stew of Portuguese heritage), “chamucas” (a local type of samosa, influenced by Indian culture) and “cachupa” (the national dish of Cape Verde). Stews feature prominently in local cuisine, two of which – “Antonese Shrimp Stew” and “Antonese Pork Stew”, are only found in Santo Antao. Being an island nation, seafood is also a staple and can be found in dishes like “bafa” (a squid dish), “bibi-style shrimp,” “buzio cabra” (a conch dish), “polvo” (an octopus dish, and many more.

If you have any questions about inflight catering for private jets in Cape Verde, contact orders@airculinaire.com.