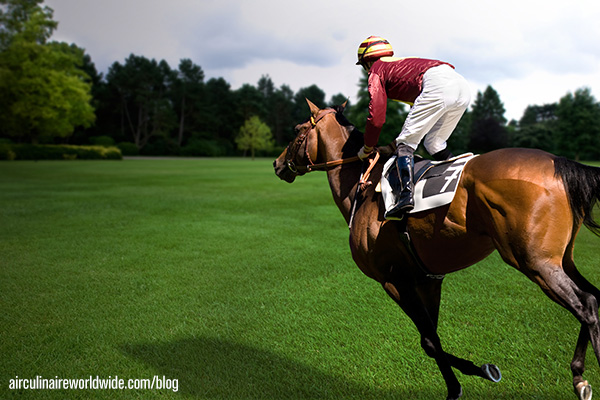 The Cheltenham Festival is held this year between 15th to 18th March at Cheltenham Racecourse. Set within the beautiful countryside of Prestbury Park in Gloucestershire, the Cheltenham Racecourse is famous for Grade I horse races, including the Cheltenham Gold Cup, which is the finale race on Friday 18th March. Gloucestershire is home to very beautiful scenery and typically ‘Old English’ villages; including The Cotswolds, famous for the hills, grassland harbour, thatched medieval villages, churches and stately homes built with local yellow limestone. March in Britain can be quite variable; we are at the end of winter where the weather slowly brightens up to head toward early spring in April and May. March is stuck in the middle of these two seasons, so we always expect some very changeable weather! In true British style, we would usually have at least two seasons in one day – bright clear sunshine one hour and then stormy dark raincloud the next!

Cheltenham itself is not only worth visiting for the scenery and the horse races, but also for its many other culture festivals held throughout the year, including the literature, music, science and jazz festivals (http://www.cheltenhamfestivals.com) spreading from April to October.The racecourse itself has a scenic location, as it is set within a natural amphitheatre at Cleeve Hill, and can hold 67,500 spectators. Gloucestershire Airport is based within Staverton and is just 8 minutes away from the racecourse, along with RAF Fairford Airport based in Fairford being 40 minutes from the racecourse. Both of these airports ACW can cater for.

Around the racecourse premises itself, there are plenty of mobile catering units that offer a variety of fare, such as fish and chips, hog roasts, burgers and hot dogs, sandwiches, teas and coffees and doughnuts. Within the ‘Pavillion’ you can find bars and a variety of music performances from different bands. Enjoy a music performance from Irelands very own ‘The Dublin Legends’ on St. Patricks day (17th March). If you’re exploring Cheltenham during the day, try a visit to the Gloucester Cathedral and The Wilson Art Gallery and Museum for some interesting facts on English heritage, and stop for coffee in one of the towns many cafes. You can also enjoy a relaxing spa day at ‘Chapel Spa,’ located in the town centre. Unfortunately, you cannot stay at the Chapel Spa, but it is highly rated and worth a visit for a day trip.

If you are looking to dine at the Cheltenham Races itself, you will find that you are spoilt for choice within the facility. Restaurants such as ‘Chez Roux’ and the ‘Panoramic Restaurant’ which can be found on the fifth and third floors, offer views of the winning post and the whole racecourse, as well as the beautiful backdrop of Cleeve Hill. These restaurants and others offer a set menu, prices starting from £215 – £750 and include fare such as canapés, afternoon teas, and a five-course a la carte. If you are looking to venture out into Cheltenham town to dine, try ‘Champignon Sauvage,’ a French two MichelinpStarred restaurant, or perhaps you would like to try ‘Prithvi,’ serving modern Indian cuisine. Both restaurants are just a 12 minute drive from the racecourse. Gloucestershire has a long tradition of high quality food production due partly to the fertility of the Cotswolds Hills, the Severn Valley and estuary. The Gloucestershire ‘Old Spot pig’ is a preferred pedigree pig that Michelin-starred restaurants and celebrity chefs will serve, as this has been awarded as ‘Traditional Speciality Guaranteed’ status. We cannot forget also, the most famous food made in Gloucestershire: Single and Double Gloucester Cheese! Both are hard in texture, but Single Gloucester is more crumbly, lighter in texture and lower in fat. Double Gloucester is allowed to age for longer periods than Single, and it has a stronger and more savoury in flavour.

As Cheltenham is renowned for its fine culture, Michelin-starred restaurants and top sporting events, expect no less when searching for the best places to stay. Try the ‘Strozzi Palace,’ just a 9-minute drive from the racecourse, or ‘Beaumont House,’ a five-star, AAA Diamond-rated hotel, just a 15-minute drive from the race course. Cheltenham is very well connected and accessible to travel around. The buses that operate the town and surrounding villages are excellent and very frequent. Look out for ‘Stagecoaches’ bus service as they serve the whole of the Gloucestershire county, with ease of access with high-backed leather seats and free Wi-Fi! These buses also link you to Oxford, which is another great location to visit for a potential day trip, depending on how long you are staying for. There are also direct train links to destinations such as London (2 hours), Birmingham (less than 50 minutes) and Bristol (less than 1 hour) from Cheltenham train station.

We hope that you enjoy your stay in Cheltenham. It is a true iconic British town to visit, with lots to see and do, and sure to satisfy any visitor due to its diverse activities, amenities and its high quality character.

If you have any questions about this article or in-flight catering in the United Kingdom, contact london@airculinaire.com.