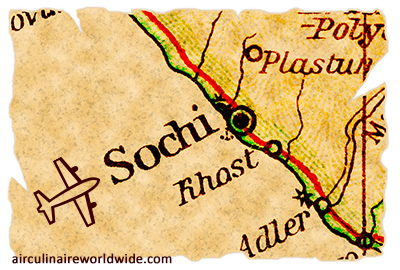 Located on the Black Sea and near the Caucasus Mountains, Sochi is Russia’s largest resort city and has won the honor of hosting the Winter Games. It is a gorgeous place and has its own identity that stands apart from Russian city life. Sochi is more laid back then Moscow and the area has many historical destinations to explore. Sochi will be a very fun atmosphere since Russia has been investing in order to provide structural upgrades to service the influx of tourists. Rest assured they will pull out all the stops in making this Winter Games memorable.

Since Sochi is a renowned vacation spot, the hotels, restaurants and other amenities will be staffed with locals and volunteers who speak English. The way some hotels and other places will identify that an employee speaks English may be by a pin on their lapel of the flag of the country whose language they speak. For example, Flag of France for those who speak French, Spanish Flag for Spanish and British Flag for English. Due to Sochi being home to over 100 ethnic groups, most people will speak multiple languages and have multiple flags on their lapel. As far as transportation, trolleys and trains are remarkably efficient to get around, while cabs may be overpriced.

Russians are known for dressing up when going to out eat, so if you are planning to dine out, it is best to check dress codes beforehand. As with any travel to a new country, if you choose water, only drink bottled water instead of tap water. If you are dining at a more traditional restaurant be sure to try out shashlyks, khinkali, khachapuri, matsoni or satsivi.

Russians are very receptive to anyone who attempts to speak Russian, and the smallest gesture will go a along way. Learning how to say “hello,” “thank you,” “please” and “goodbye” is the best social currency you can have. Russia is with no doubt going to put on a great show, so be ready to have an amazing time in Sochi while all eyes are on the 2014 Winter Games.

If you have any questions about inflight catering for private jets in Russia, contact weborders@airculinaire.com.