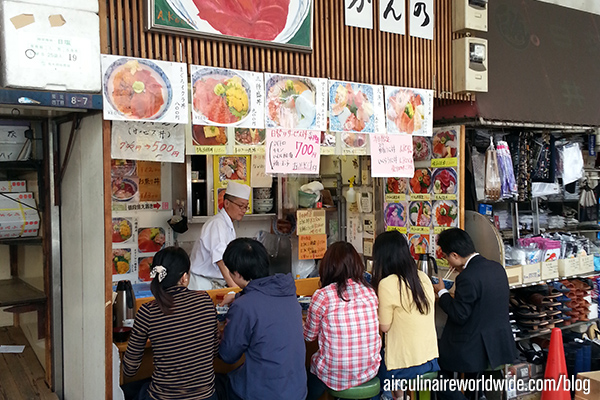 The next morning I got up at 04:00 and strolled over to the infamous Tsukiji Fish Market (ranked as one of the top two fish markets in the world) for the tuna auction. When I arrived, there was a queue of over 100 people waiting to get in. The tuna auction is limited to 120 people a day, allowing two shifts of 60 to enter at a time. Even though I got up with what I thought was enough time, I was not one of the 120 to get in.

Since I was up and already there, I went to the wholesale seafood market where I was amazed by the mountains of fish and seafood. There was everything from the notorious 400-pound tuna, bright purple octopus, enormous shrimp, live blue crab, oysters and scallops the size of dinner plates, 3-foot squid, an array of every fish imaginable, and some things I had no idea what they were (like a large sea snail called the Horned Turban). The mongers were feverishly hocking their goods while the local purchasers were haggling for better prices. After what seemed like a heated debate, the two parties came to an agreement on price, then the seafood was processed and the buyer walked off with a bill of sale and went to the receiving dock and received their order. The process of dealing and the fish flying around is not the only exciting thing that is going on; the traffic of loading vehicles and the rushing of trucks is also worth being fully aware of. There are signs in Japanese and English that explain that the market is a very dangerous place for sightseers. After all this excitement, once again I was hungry. However, what does one eat at 08:00 in a fish market? Sushi, of course.

There are several small sushi stalls next to the market where the fish used could not be any fresher. Lines begin to form as early as 05:00 for a number of the restaurants. These 12 to 15 person restaurants offer an extensive arrangement of nigiri, maki, sashimi and chef-created specialties, as well as seafood based soups. I got in line with the rest of the local shoppers and fishermen at Sushidai. After about an hour wait, I was seated with a dozen other people and rushed to make a selection. In a panic, I just pointed at an item and hoped for the best. I was pleasantly surprised when the server brought to me a lovely board of toro, sawara, uni, ikura, hirame, anago, tamago and miso soup. It was so fresh I could still taste the saltwater. The cost was about 3000 yen (28.00 USD) but it was well worth it. Later that afternoon, I returned with the crew to experience it all again.

Next door to the fish market is the Jōgai-Shijo (the outer market) of Tsukiji. This area is a collection of small storefronts selling everything from dried fruits and herbs, fruits and vegetables, teas, spices, cookware and kitchen goods. I found beautiful matsutake and maitake mushrooms (so fresh they were still covered in dirt), nashi pears and fresh roots of wasabi. Barrels of green, black, oolong and other teas were prevalent. I marveled at the knife makers who were hand-sharpening stamped, metal knives of all shapes and sizes into razor-sharp culinary instruments.

I then followed an enticing smell around the corner and discovered a man with a charcoal grill and enormous open scallop shells on the fire. I ordered one, and the gentleman pulled out a monstrous fresh scallop, opened in up, placed a shrimp and sea urchin on top of the scallop and poured ponzu on top of it all. He then placed the shell with the mixture directly on the grill and cooked it until the liquid boiled. Then, using a blowtorch, he cooked the top ingredients giving the entire concoction a golden color. Then he gave one more splash of ponzu and transferred it onto a plastic plate. I sat down on the curb across the street and devoured the entire thing in less than five minutes. I returned to my market adventure and sampled several other items, including tempura, shabu-shabu, soba, yakitori, izakaya, tonkatsu and several other cooking styles.

I was about to hurry back to the hotel to check my email regarding the status of our next flight when I got a text message letting me know when and how we would be departing. I quickly arranged for catering, requested the upload of dishes and laundry, added seven crew meals and retired to bed for a 05:00 show in the hotel lobby. It was easy to fall asleep after all the walking and food I managed to stuff myself with on my 14-hour tour.

This is the second part of a series on my personal experiences as an onboard chef visiting Tokyo, Japan. If you have any questions about this article or about in-flight catering, contact weborders@airculinaire.com.